Baby in a basket / Gloria Rand ; illustrated by Ted Rand. 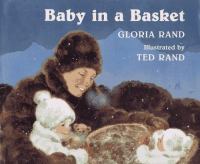 Baby in a Basket
by Rand, Gloria; Rand, Ted (Illustrator)
Rate this title:
vote data
Click an element below to view details:

Baby in a Basket


A true-life adventure story illustrated in shimmering watercolor.It was mid-winter in the year 1917 when Marie Boyer and her two small daughters left Fairbanks,Alaska. In a sleigh pulled by six huge horses, they, along with two other passengers and the sleigh driver, set out on an estimated ten-day journey to a seaport where they were to board a ship and sail south to Seattle.Three-year-old Betty and four-month-old baby Ann were bundled against the cold. They traveled throughout the day and stopped nights at small lodges along the trail. Nearing the Delta River, in stormy weather, the horses bolted,plunging the sleigh through the ice that covered the river, scattering passengers and their belongings in every direction. Baby Ann, in a small basket piled high with furs, vanished. Will she be found?Here unfolds an exciting tale of hardship and survival in the wilderness, based on a true story illustrated in dramatic detail by Ted Rand.Gloria and Ted Rand, husband and wife team, have collaborated on a number of books.
► Shelf Browser
► MARC Record
◄ Search Results Showing Item 5 of 15
◄ Previous Next ►