All-of-a-kind family Hanukkah / based on the classic books by Sydney Taylor ; written by Emily Jenkins ; illustrated by Paul O. Zelinsky. 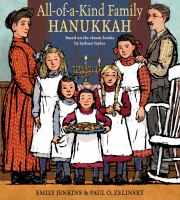 Emily Jenkins has written many highly acclaimed books for children, including Water in the Park , a Booklist Editors' Choice and a Bulletin Blue Ribbon Book; Lemonade in Winter , a Publishers Weekly Best Book of the Year; and two Boston Globe-Horn Book Honor Books: Five Creatures and That New Animal . She is also the author of the popular Toys trilogy: Toys Go Out , Toy Dance Party , and Toys Come Home . She lives in Brooklyn, New York. Paul O. Zelinsky was born in Evanston, Illinois. He attended Yale University, where he took a course with Maurice Sendak, which later inspired him to pursue a career in children's books. He went on to receive a graduate degree in painting from Tyler School of Art, in Philadelphia and Rome. His first book was published in 1978. Among many other awards and prizes, he received the 1998 Caldecott Medal for his illustrated retelling of Rapunzel , as well as Caldecott Honors for three of his books: Hansel and Gretel (1985), Rumpelstiltskin (1987), and Swamp Angel (1995). Paul Zelinsky lives in New York with his wife, Deborah.