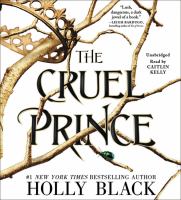 View all formats and editions (6)

The Cruel Prince
by Black, Holly; Kelly, Caitlin (Read by)
Rate this title:
vote data
Click an element below to view details:

Holly Black was born in West Long Branch, New Jersey on November 10, 1971. She graduated with a B.A. in English from The College of New Jersey in 1994. Her first book, Tithe: A Modern Faerie Tale was published in 2002 and was included in the American Library Association's Best Books for Young Adults. Her other works include The Spiderwick Chronicles written with Tony DiTerlizzi, Ironside, Poison Eaters and Other Stories, The Coldest Girl in Coldtown, The Iron Trial (Magisteruim Book 1) and The Copper Gauntlet (Magisteruim Book 2) written with Cassandra Clare, and The Darkest Part of the Forest. Valiant won the Andre Norton Award for Excellence in Young Adult Literature. She also won the Young-Adult Prize in the Indies Choice Book Awards 2015 for The Darkest Part of the Forest. Black and Clare's Magisterium Series has received both critical and popular acclaim appearing on numerous bestseller lists including The New York Times bestseller list in the Young Adult category. (Bowker Author Biography)