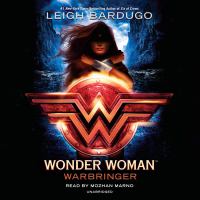 Wonder Woman's backstory is fairly well-known Amazon princess, isolated island populated only by women, defender of truth and justice, snappy golden lasso, etc. but Bardugo breathes zippy new life into the story with a twisty plot, whip-smart characters, and her trademark masterful writing. Diana is eager to prove her valor to the other Amazons on Themyscira, but her chosen act of heroism Â­rescuing teenage Alia from a shipwreck outside the boundary waters of the island wreaks havoc on the island's delicate balance. Of course, that's not all: Alia is a warbringer, and her mere existence will spark global war unless Diana can intervene. Seamlessly integrating classic Wonder Woman lore with her own updated take, Bardugo fleshes out Diana's backstory and the mythology of Themyscira, adds in sly commentary on feminism and equality, and leavens the package with wry comedy Diana's dour obliviousness to contemporary culture will make readers guffaw. This will certainly please seasoned fans of Wonder Woman, but with a cinematic plot and a diverse cast of thoughtfully well-Â­rounded characters, don't be surprised if it garners wider appeal, too. HIGH-DEMAND BACKSTORY: Combine best-selling, acclaimed Bardugo with one of this summer's most hotly anticipated movies, and you've got a recipe for a blockbuster on your hands.--Hunter, Sarah Copyright 2017 Booklist

Gr 9 Up-Before she was Wonder Woman, she was Diana, daughter of Hippolyta-and desperate for her mother's approval. When Diana witnesses a shipwreck, she decides she cannot let the sole survivor drown. But when disease begins to afflict Diana's Amazon sisters, and earthquakes shake the island of Themyscira, it becomes clear that Diana's choice to rescue Alia has consequences she never could have imagined. Alia is no ordinary girl-she is a descendant of Helen of Troy, the woman whose face "launched a thousand ships." But it wasn't Helen's beauty that drove men to war-Helen was a Warbringer, a deadly legacy Alia has inherited. Diana, Alia, and a motley crew of New York teenagers must find a way to end Alia's potentially destructive power and prevent global war. But there are both human and mythological forces that stand in their way. This book is cinematic in its presentation-fans of the Wonder Woman movie or comics will be satisfied by the fight sequences and the sidekick characters. And the plot about the world on the brink of war feels timely. This book will also appeal to fans of James Patterson's "Maximum Ride" series. -VERDICT Not very nuanced, but full of heart and good fun. A strong choice for collections needing female-powered titles for reluctant readers.-Heather M. Campbell, formerly at Philip S. Miller Library, Castle Rock, CO Â© Copyright 2017. Library Journals LLC, a wholly owned subsidiary of Media Source, Inc. No redistribution permitted.