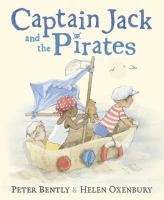 Captain Jack and the Pirates
by Bently, Peter; Oxenbury, Helen (Illustrator)
Rate this title:
vote data
Click an element below to view details:

Captain Jack and the Pirates


The boys from King Jack and the Dragon are back in this swashbuckling pirate adventure with pictures by the New York Times bestselling illustrator of Ten Little Fingers and Ten Little Toes Jack, Zack, and Caspar are building a ship--on the beach, out of sand. When they set sail on their imaginary adventure, Jack spies an enemy pirate ship nearby. They chase after the pirates, but a storm wrecks their ship and sweeps them up on a desert island. The island isn't totally deserted, though--their pirate enemies are there too. Just as the boys discover the pirates' treasure (an array of delicious desserts), the pirates (their parents) capture them. But these pirates are friendly--they're willing to share the treasure, and they throw in some ice cream just for good measure! Perfect for storytime read-alouds, this picture book is just right for fans of Three Bears in a Boat , How I Became a Pirate , and We're Going on a Bear Hunt .
► Shelf Browser
► MARC Record