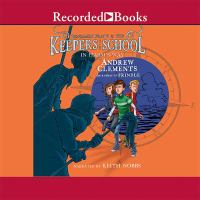 In Harm's Way
by Clements, Andrew; Nobbs, Keith (Narrated by)
Rate this title:
vote data
Click an element below to view details:

Gr 3-6-In the fourth installment (Atheneum, 2013) in Clements's series, Benjamin and his friends Jill and Robert reflect on their most recent accomplishment: discovering an access point to the Underground Railroad and saving the school from Janitor Lyman. Their victory is short-lived because Lyman is still determined to demolish the school and turn it into an amusement park. Lyman has teamed up with a new assistant and attempts to manipulate the residents of this small Massachusetts town, including Benjamin's own mother. As Keepers, it is Benjamin and his friends' job to protect the school at all costs. Narrator Keith Nobbs accurately voices the story's action in an upbeat and mysterious tone. Familiarity with the characters from the previous volumes would be helpful since much of the action centers around past attempts at the demolition of the school. Purchase where other Clements books are popular, and be sure to have the previous three titles available.-Amanda Schiavulli Finger Lakes Library System, NY (c) Copyright 2013. Library Journals LLC, a wholly owned subsidiary of Media Source, Inc. No redistribution permitted.