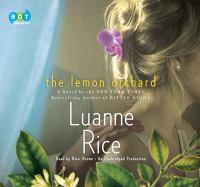 Novelist Luanne Rice was born in Old Lyme, Connecticut on September 25, 1955. She has written over twenty books and her stories, such as Home Fires and Cloud Nine, depict average people in emotionally complex situations. Many of her novels have been adapted into TV movies including Crazy in Love (1992) which starred Holly Hunter, Bill Pullman and Gena Rowlands, and Blue Moon (1999) which starred Sharon Lawrence, Kim Hunter and Richard Kiley. She currently splits her time between New York City and Old Lyme, Connecticut. (Bowker Author Biography) Luanne Rice is the author of Follow the Stars Home, Cloud Nine, Secrets of Paris, Stone Heart, Angels All over Town, Home Fires, Crazy in Love (made into a TNT Network feature movie), and Blue Moon, which has been made into a CBS television movie. Originally from Connecticut, she now lives in New York City with her husband. (Publisher Provided) Luanne Rice is the author of ten novels, most recently Dream Country, Follow the Stars Home, and Cloud Nine. She lives in New York City and Old Lyme, Connecticut, with her husband. (Publisher Provided)