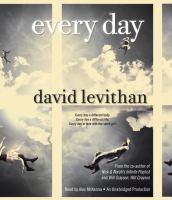 To see other titles in our catalog that have won the High School Nutmeg Award, click here.

View all formats and editions (8)

Gr 7 Up-"A" wakes up in a different body every day. He establishes guidelines for himself so he will not get too involved with people and disrupt lives. Then "A" wakes up one morning in Justin's body and meets his girlfriend, Rhiannon. All his self-imposed rules get tossed out the window because he wants to be with her all the time. Without understanding why, the inhabited teens borrow cars, go to parties, and cut school. When "A" leaves Nathan, one of his host bodies, by the side of the road after curfew, he's shocked to learn that Nathan thinks he was possessed. "A" has to find a way to romance Rhiannon as a different person every day and fend off Nathan's demanding emails. Loaded with intriguing plot points and bittersweet romance, Levithan's fast-paced story (Knopf, 2012) deals with themes involving ethics and trust. Alex McKenna's scratchy, just-woke-up sounding voice suits both male and female characters, and he really sells the emotional stress "A" faces as he tries to do what's right. Sequels are in the offing, so the ending is less than conclusive and takes on a thriller tone once "A" learns that there are others like him. This title will have broad audience appeal.-C.A Fehmel, St. Louis County Library, MO (c) Copyright 2012. Library Journals LLC, a wholly owned subsidiary of Media Source, Inc. No redistribution permitted.

*Starred Review* A (his only name) has a secret. Each morning he wakes up in a different body and life. Sometimes he is a boy, sometimes a girl; sometimes he is gay, sometimes straight; sometimes he is ill, more often well. The only unchanging facts are that he is always 16, and it is a different persona he borrows each day. It has always been this way for him, though he doesn't know why it should be. He does know that it is imperative that he do nothing to change his host's life, until he meets Rhiannon and, for the first time, falls in love. And then all bets are off. Levithan has created an irresistible premise that is sure to captivate readers. While the story requires a willing suspension of disbelief, the plot is so compelling that readers will be quick to comply. Aside from his premise, Levithan has done an extraordinary job of creating more than 30 characters, each one a distinct individual and each one offering fresh insights into A's character. Those familiar with Levithan's earlier work will not be a bit surprised to learn that his latest is beautifully written (lips are gates of desire ; sadness turns our features to clay, not porcelain ). All these elements work together to make a book that is a study in style, an exercise in imagination, and an opportunity for readers themselves to occupy another life, that of A himself. HIGH-DEMAND BACKSTORY: Levithan is one of the giants of YA literature, but lest anyone forget, there's a robust marketing campaign backing up his latest effort.--Cart, Michael Copyright 2010 Booklist

Imagine waking up every morning in a different body, with a different personality, and a different life. This is reality for A, who experiences a new beginning every day of his life. And while A has come to accept this fate, when he awakens to meet the woman of his dreams, he decides he must find a way to break the cycle. Leviathan's entertaining and imaginative novel comes to life in this inspired reading by Alex McKenna. Despite the fact that A is a male, the female McKenna brilliantly captures the character, adding nuance and depth. The narrator's delivery is confident, emotive, and captivating-at times it sounds as if she is reading from her own diary. The result is truly memorable listening. Ages 12-up. A Knopf hardcover. (Aug.) (c) Copyright PWxyz, LLC. All rights reserved.