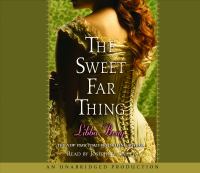 The Sweet Far Thing
by Bray, Libba; Bailey, Josephine (Read by)
Rate this title:
vote data
Click an element below to view details:


It has been a year of change since Gemma Doyle arrived at the foreboding Spence Academy. Her mother murdered, her father a laudanum addict, Gemma has relied on an unsuspected strength to turn catty schoolgirls into loyal friends, and has discovered an ability to travel to an enchanted world called the realms, where dark magic runs wild. Despite certain peril, Gemma has bound the magic to herself and forged unlikely new alliances with headstrong Felicity and timid Ann; with Kartik, an exotic young Indian man whose companionship is forbidden; and with the fearsome creatures of the realms. Now, as Gemma approaches her London debut, the time has come to test these bonds. The Order, the mysterious group Gemma's mother was once part of, is grappling for control of the realms, as are the Rakshana. It is there that the girls meet their adored friend Pippa, who is not the same . . . or is she? The power to change everything-both in and out of the realms-rests in Gemma's hands. Libba Bray's The Sweet Far Thing concludes the trilogy that began with the bestsellers A Great and Terrible Beauty and Rebel Angels .
► Shelf Browser
► MARC Record
◄ Search Results Showing Item 2 of 14
◄ Previous Next ►