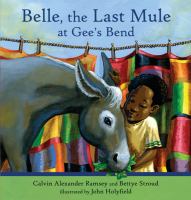 As Alex observes a mule devouring a garden, he is joined by a very properly dressed older woman who introduces herself as Miz Pettway and explains that the mule, Belle, is allowed to eat from her garden because of Belle's distinguished place in history. Miz Pettway recounts civil rights conflicts in their town of Gee's Bend in the 1960s and the role their mules played in pulling Dr. Martin Luther King Jr.'s casket through Atlanta streets. Although not told in dialect, the smooth, flowing narration establishes a southern tone and gracefully inserts details about the poor, hardworking African American community, both past and present. Expressive, realistic acrylic paintings portray the interaction between Alex and Miz Pettway with humor and dignity. One particularly dramatic double-page spread depicts African Americans, mostly on foot and in mule-drawn carts, on their long, determined journey to vote. Striking a fine balance of pride and humility, this appealing historical side note will enhance multicultural and civil rights studies.--Perkins, Linda Copyright 2010 Booklist

Gr 2-3-In this true story from the 1960s, a poor African-American community in Alabama becomes a microcosm for the Civil Rights Movement itself. While waiting for his mother to finish shopping, Alex occupies himself by watching a mule snack on a field of collard greens. He is surprised when an old woman walks by and tells him it is fine for Belle to eat as much as she wants. Miz Pettway explains by telling him a story. The people of Gee's Bend (or "Benders") were thrilled when the Rev. Martin Luther King, Jr., came to speak to them. No black person from their county had ever dared to vote, but after Dr. King suggested that they register in nearby Camden, they were empowered to do it. When local authorities closed the ferry, the Benders arranged their own transportation. The same was true when the time came to vote. When several people lost their jobs as a result, they banded together and began making beautiful quilts as a means of support. In the sad days following Dr. King's assassination, the Benders were called upon again. Dr. King had wanted mules to pull a farm cart bearing his burial casket through the streets of Atlanta. The Benders sent Belle and another mule and once again succeed in spite of the barriers put in their way. Expressive acrylic illustrations in rich colors help make the story child-friendly and accessible. Belle is depicted with an appealing personality, but she is not anthropomorphized. This low-key, unsentimental story is a great vehicle for showing children how ordinary people can make a great difference.-Lucinda Snyder Whitehurst, St. Christopher's School, Richmond, VA (c) Copyright 2011. Library Journals LLC, a wholly owned subsidiary of Media Source, Inc. No redistribution permitted.

As Alex, a contemporary African-American boy, watches a mule named Belle munching collard greens in a garden in Gee's Bend, Ala., her elderly owner tells him that the animal can eat all she wants-"She's earned it." Inspired by real events, Ramsey (Ruth and the Green Book) and Stroud's (The Patchwork Path: A Quilt Map to Freedom) story steps back in time as the woman explains why. After Martin Luther King Jr. visited the poor community in 1965 and rallied its black residents to register to vote, Belle and other mules brought wagonloads of people out to do just that after the white sheriff shut down the ferry; later Belle and another mule pulled King's casket through the streets of Atlanta during his funeral procession. The story is written as a conversation between the woman and Alex, her first-hand perspective on events epitomizing the idea of "living history." Lit with bright blues suggestive of period film posters, Holyfield's (The Hallelujah Flight) thickly painted acrylic scenes successfully capture the story's modern and historical eras. An author's note provides further detail about Belle and Dr. King. Ages 5-8. (Sept.) (c) Copyright PWxyz, LLC. All rights reserved.