Many Bibliomation libraries have closed to the public indefinitely to prevent the spread of the coronavirus. Please contact your local library staff or consult their website for more information about the services they are providing during this time.
Home Best Sellers & Award Winners Nutmeg Awards & Nominees Charter Oak Children's Book Award Kids Catalog 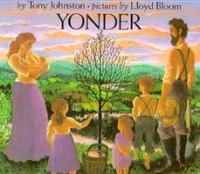 View all formats and editions (2)

Tony Johnston was born in Los Angeles, California on January 30, 1942. She received a B.A. in history and an M.A in education from Stanford University. Before becoming a full-time author, she worked as a fourth-grade teacher. She has written over 70 books for children. Her titles include Amber on the Mountain, the Cowboy and the Black-Eyed Pea, Day of the Dead, the Ghost of Nicholas Greebe, the Sparky and Eddie series, and the Adventures of Mole and Troll. Her first adult novel was Any Small Goodness. Her works have earned her several awards including a Children's Choice Award for Four Scary Stories and the Beatty Award in 2002 for Any Small Goodness. (Bowker Author Biography)