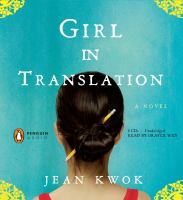 To see other titles in our catalog that have won the Alex Award, click here.

View all formats and editions (6)

Drawing on Kwok's personal experience, this debut novel tells a contemporary immigration story of heartbreaking struggle and wild success. Ah Kim, 11, leaves Hong Kong in the 1980s and moves with Ma into a freezing Brooklyn slum apartment infested with roaches and rats. The hostile teacher calls Kimberly a cheat when she gets good grades. After school, she helps Ma reach her quota in a clothing factory in Chinatown, sometimes until midnight. In simple, searing, richly detailed prose, Kwok captures the anguish of the struggle, including the illegal factory work and child labor, but eventually, as fortunes change, the novel becomes a rags-to-riches story (Kimberly gets into a top high school and then Yale). Success, however, brings the universal immigrant lament of not fitting in. Kim cannot get the rules of fighting and flirting, and her misunderstandings are both hilarious and wrenching. I wanted to be part of things but I had no idea how. And, always, there are those who don't make it. Immigrants, new and old, will find much to savor here, from the drama of family secrets to the confusing coming-of-age.--Rochman, Hazel Copyright 2010 Booklist

After emigrating from Hong Kong, 11-year-old Kimberly Chang and her mother are confined by poverty to New York City sweatshops and squalor. Kimberly's Americanization culminates when the math and science wunderkind earns scholarships to an exclusive private secondary school, and then to Yale. Kwok's (jeankwok.net) debut novel, based on her own immigrant childhood spent toiling in a Chinatown sweatshop while immersed in Chinese manners, culture, and idioms, sparkles with authenticity. Voice artist Grayce Wey's Chinese accent provides a subliminal affirmation of the characters' dignity. An engrossing coming-of-age tale recommended for both adults and mature teens. ["Reminiscent of An Na's A Step from Heaven," read the review of the Riverhead hc, LJ 2/15/10.-Ed.]-Judith Robinson, Dept. of Lib. & Information Studies, Univ. at Buffalo (c) Copyright 2010. Library Journals LLC, a wholly owned subsidiary of Media Source, Inc. No redistribution permitted.

This audiobook is the perfect match of narrator and material. Grayce Wey's performance as immigrant Kimberly Chang feels absolutely authentic. As the adult Kimberly looking back at her life, Wey has just a touch of a Chinese accent (appropriate for a character who's lived in America for two decades), and her tone conveys bittersweet regret even while knowing she made the right choice. But when speaking as the younger, newly arrived Kimberly, Wey's Chinese accent is much heavier, and we can hear Kimberly's confusion, anxiety, and struggle to adjust to this new culture. Wey perfectly evokes Kimberly's growing assertiveness and determination, her teenage longing, joy, and pain when falling in love for the first time, and her conflicted feelings when making difficult decisions about her path in life. A moving and memorable listen. A Riverhead hardcover (Reviews, Mar. 15). (May) (c) Copyright PWxyz, LLC. All rights reserved