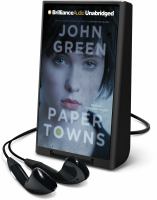 To see other titles in our catalog that have won the High School Nutmeg Award, click here.

View all formats and editions (14)

Gr 9 Up-Quentin Jacobsen, 17, has been in love with his next-door neighbor, Margo Roth Spiegelman, for his entire life. A leader at their Central Florida high school, she has carefully cultivated her badass image. Quentin is one of the smart kids. His parents are therapists and he is, above all things, "goddamned well adjusted." He takes a rare risk when Margo appears at his window in the middle of the night. They drive around righting wrongs via her brilliant, elaborate pranks. Then she runs away (again). He slowly uncovers the depth of her unhappiness and the vast differences between the real and imagined Margo. Florida's heat and homogeneity as depicted here are vivid and awful. Green's prose is astounding-from hilarious, hyperintellectual trash talk and shtick, to complex philosophizing, to devastating observation and truths. He nails it-exactly how a thing feels, looks, affects-page after page. The mystery of Margo-her disappearance and her personhood-is fascinating, cleverly constructed, and profoundly moving. Green builds tension through both the twists of the active plot and the gravitas of the subject. He skirts the stock coming-of-age character arc-Quentin's eventual bravery is not the revelation. Instead, the teen thinks deeper and harder-about the beautiful and terrifying ways we can and cannot know those we love. Less-sophisticated readers may get lost in Quentin's copious transcendental ruminations-give Paper Towns to your sharpest teens.-Johanna Lewis, New York Public Library (c) Copyright 2010. Library Journals LLC, a wholly owned subsidiary of Media Source, Inc. No redistribution permitted.

Green melds elements from his Looking for Alaska and An Abundance of Katherines-- the impossibly sophisticated but unattainable girl, and a life-altering road trip--for another teen-pleasing read. Weeks before graduating from their Orlando-area high school, Quentin Jacobsen's childhood best friend, Margo, reappears in his life, specifically at his window, commanding him to take her on an all-night, score-settling spree. Quentin has loved Margo from not so afar (she lives next door), years after she ditched him for a cooler crowd. Just as suddenly, she disappears again, and the plot's considerable tension derives from Quentin's mission to find out if she's run away or committed suicide. Margo's parents, inured to her extreme behavior, wash their hands, but Quentin thinks she's left him a clue in a highlighted volume of Leaves of Grass. Q's sidekick, Radar, editor of a Wikipedia-like Web site, provides the most intelligent thinking and fuels many hilarious exchanges with Q. The title, which refers to unbuilt subdivisions and "copyright trap" towns that appear on maps but don't exist, unintentionally underscores the novel's weakness: both milquetoast Q and self-absorbed Margo are types, not fully dimensional characters. Readers who can get past that will enjoy the edgy journey and off-road thinking. Ages 12-up. (Oct.) (c) Copyright PWxyz, LLC. All rights reserved

*Starred Review* Quentin or Q. as everyone calls him has known his neighbor, the fabulous Margo Roth Spiegelman, since they were two. Or has he? Q. can't help but wonder, when, aÂ month before high-school graduation, she vanishes. AtÂ first he worries that she might have committed suicide, but then he begins discovering clues that seem to have been left for him, which might reveal Margo's whereabouts. Yet the more he and his pals learn, the moreÂ Q. realizes he doesn't knowÂ and the more he comes to understand that the real mystery is not Margo's fate but Margo herself enigmatic, mysterious, and so very alluring. Yes, there are echoes of Green's award-winningÂ Looking for Alaska (2006): a lovely, eccentric girl; a mystery that begs to be solved by clever, quirky teens; and telling quotations (from The Leaves of Grass, this time) beautifully integrated into the plot. Yet, if anything, the thematic stakes are higher here, as Green ponders the interconnectedness of imagination and perception, of mirrors and windows, of illusion and reality. That he brings it off is testimony to the fact that he is not onlyÂ clever and wonderfully witty but also deeply thoughtful and insightful.Â In addition, he's aÂ superb stylist, with a voice perfectly matched toÂ his amusing, illuminating material.--Cart, Michael Copyright 2008 Booklist