Going, going, gone! with the Pain and the Great One [sound recording] / Judy Blume. 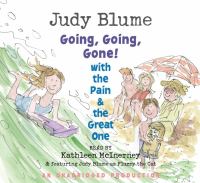 Going, Going, Gone! with the Pain and the Great One
by Blume, Judy; McInerney, Kathleen (Read by)
Rate this title:
vote data
Click an element below to view details:

Going, Going, Gone! with the Pain and the Great One

Gr 1-3-Jake, a first grader, is the Pain, and his sister Abigail, a third grader, is the Great One in Judy Blume's seven slice-of-life stories (Delacorte, 2008) that involve the entire family. For example, at the beach, the Pain is afraid of the ocean. When the siblings go to the fair with Aunt Diana, Jake takes a ride on the Gravitron. At the mall, they must decide which movie they will see and which fast food restaurant they will visit. After the Pain sticks a pussy willow up his nose, there's a trip to the emergency room to remove his "furry booger." Kathleen McInerney reads in a measured, mostly child-like voice. Another humorous collection that will be enjoyed by Blume's fans and could be used effectively as a read-along by ESL students.-Marilyn Hersh, Hillside Elementary School, Farmington Hills, MI (c) Copyright 2010. Library Journals LLC, a wholly owned subsidiary of Media Source, Inc. No redistribution permitted.