Hack the SAT : a private SAT tutor spills the secret strategies and sneaky shortcuts that can raise your score hundreds of points / Eliot Schrefer. 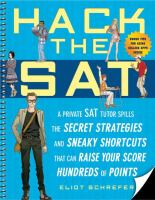 Hack the SAT : Strategies and Sneaky Shortcuts That Can Raise Your Score Hundreds of Points
by Schrefer, Eliot
Rate this title:
vote data
Click an element below to view details:

Hack the SAT : Strategies and Sneaky Shortcuts That Can Raise Your Score Hundreds of Points

Eliot Schrefer is a notable, best-selling young adult author. Schrefer attended Harvard University, where he graduated with High Honors in French and American literature. Schrefer's first novel, Glamorous Disasters, was a somewhat autobiographical tale of a young man living in Harlem and paying off college debt while tutoring Fifth-Avenue families. After writing another novel for adults, he turned to young adult fiction with The School for Dangerous Girls, about a boarding school for criminal young ladies. That book was selected as a "Best of the Teen Age" by the New York Public Library, and his next novel, The Deadly Sister, earned a starred review from School Library Journal. Schrefer's fifth novel Endangered, about a girl surviving wartime in Congo with an orphan bonobo ape, was a finalist for the National Book Award in Young People's Literature, one of NPR's "Best of 2012," and an editor's choice in The New York Times. ELIOT SCHREFER is also the author of Threatened, a finalist for the National Book Award in Young People's Literature in 2014, about a boy surviving in the jungles of Gabon alongside chimpanzees and Rise and Fall, the sixth book in the Spirit Animals Series. Schrefer's works have been translated into many languages including German, Russian, Polish, Taiwanese, Bulgarian, and Japanese. (Bowker Author Biography)