Cool zone with the Pain and the Great One [sound recording] / Judy Blume. 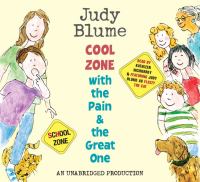 View all formats and editions (2)

Cool Zone with the Pain and the Great One
by Blume, Judy (Author, Read by); McInerney, Kathleen (Read by)
Rate this title:
vote data
Click an element below to view details:

Cool Zone with the Pain and the Great One

Judy Blume was born in Elizabeth, New Jersey on February 12, 1938. She received a bachelor's degree in education from New York University in 1961. Her first book, The One in the Middle Is the Green Kangaroo, was published in 1969. Her other books include Are You There, God? It's Me Margaret; Then Again, Maybe I Won't; Tales of a Fourth Grade Nothing; Otherwise Known as Sheila the Great; and Blubber. Her adult titles include Wifey, Smart Women, Summer Sisters, and In the Unlikely Event. In 1996, she received the American Library Association's Margaret A. Edwards Award for Lifetime Achievement and in 2004, she received the National Book Foundation's Medal for Distinguished Contribution to American Letters. (Bowker Author Biography) Judy Blume is a worldwide bestselling author of numerous novels for adults as well as children. Judy Blume has more than 70 million copies of her books in print. (Publisher Provided)