Bessie Smith and the night riders 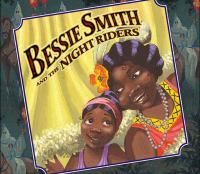 Bessie Smith and the Night Riders

Gr. 2-4. Like Pam Munz Ryan's Amelia and Eleanor Go for a Ride0 (1999), this is one of those books that seem to be history; then the author's note describes how (in this case) the incident was "dressed up for dramatic effect." Stauffacher bases her story on an event that took place in 1927. Bessie Smith, a blues singer, was performing in North Carolina when several Ku Klux Klan members tried to collapse the tent where she was performing. Bessie learned what was happening, confronted the men, and told them off, finishing up with, "You ain't nothin' but a bunch of sissies!" The story unfolds through the eyes of young Emmarene, a Smith fan, who can't afford a ticket to the show. Emmarene spots the Klansmen--or Night Riders--who, in this version, are on horseback, with torches, ready to burn the tent. This embellishment allows for a striking illustration in which Smith stares down rows of hooded riders, cussing at them and scaring them off. Yes, this is catalogued as fiction, but had there actually been a dozen torch-wielding riders as portrayed in the picture (rather than six on their feet in the real incident), this event might have had a different ending. Moreover, should kids want to find additional information on Smith, they will probably get more than they bargained for--including the suggestive lyrics of her songs and descriptions of her wanton ways. On its own, however, this book is dramatic fare, and kids will enjoy the story of a strong woman scaring off bad guys. Holyfield's thickly painted pictures are full of snap and sizzle, with gamine Emmarene making a good counterpoint to sassy, high-stepping Smith. --Ilene Cooper Copyright 2006 Booklist

Bessie Smith and the Night Riders

Gr 2-5-On a hot July day in 1927, the townsfolk of Concord, NC, gather to greet "the most famous blues singer in all the South" as she disembarks from her touring train. Emmarene Johnson, a youngster who longs to attend the evening's tent show by "Bessie Smith and her Harlem Frolics," can't afford a ticket and must be content with peeking through the tent flaps for a look at her idol. From this vantage point, she notices Ku Klux Klan members removing the tent stakes and alerts the singer to the danger. She marches outside, draws herself up to her full six feet, sends the Night Riders packing, and then continues her performance. While Smith's hard-drinking and often-violent lifestyle are not mentioned here, Holyfield's brilliantly colored acrylic spreads aptly depict a larger-than-life individual. Clad in red with feather boa flying, she takes center stage whenever she appears. The horizontal shape of the book affords a wonderful view of Bessie's decorative red train; seen atop a hill, the train and the Blues Queen seem to dominate the town. Klan riders, torches blazing, extend across a subsequent spread. The book is based on a true event, "dressed up a little for dramatic effect"; Stauffacher replaces the musician who actually sounded the alarm with Emmarene and tells the story from her point of view. This tale of courage would make a fine addition to units on the Civil Rights movement.-Marianne Saccardi, Norwalk Community College, CT (c) Copyright 2010. Library Journals LLC, a wholly owned subsidiary of Media Source, Inc. No redistribution permitted.