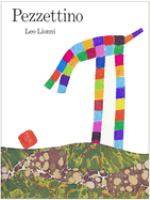 Pezzettino
by Lionni, Leo
Rate this title:
vote data
Click an element below to view details:

Leo Lionni was born in Amsterdam on May 5, 1910. He attended the University of Zurich and also earned a doctorate in Economics from the University of Genoa in 1935. He taught himself to draw by visiting museums. After marrying Nora Maffi in 1931, Lionni moved to Milan, Italy, where he became known as a painter. In 1939 he moved to Philadelphia and began working in advertising design. Lionni held several positions in the artistic field including artistic director and design director. He also served as president of the American Institute of Graphic Arts. Around 1960 Lionni moved back to Italy. His first of over forty children's books was Little Blue and Little Yellow. Other titles include Inch by Inch, Frederick, Swimmy, and Alexander and the Wind-up Mouse, all of which won a Caldecott Honor. In addition, he received the American Institute of Graphic Arts Gold Medal in 1984. Lionni died on October 11, 1999 at his home in Tuscany, Italy at the age of 89. (Bowker Author Biography)