What do you do when something wants to eat you? / by Steve Jenkins. 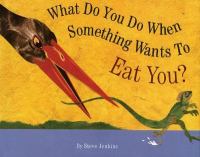 Gr 3-5ÂJenkins answers the question of what different creatures do when another wants them for dinner. He identifies the animal on one page ("the bombardier beetle defends itself...") and then follows up with its defense mechanism on the next ("by shooting a mixture of hot chemicals from its rear end and into the face of an attacker"). The artist's trademark cut-paper collages on textured backgrounds show both attacker and potential prey on one page, and then a close-up of the animal escaping on the next. Defenses include mimicry, camouflage, and speed as well as specific responses such as the ink that octopuses use or the puffer fish's ability to expand itself. The final page invites readers to imagine, "What would you do if something wanted to eat you?" Useful for teachers introducing animal defenses and the terms that go along with the subject and a great choice for a storytime.ÂSally Bates Goodroe, Houston Public Library (c) Copyright 2010. Library Journals LLC, a wholly owned subsidiary of Media Source, Inc. No redistribution permitted.

Ages 4^-8. Fourteen different animals escape their predators in this thrilling, beautiful science book illustrated with Jenkins' dramatic cut-paper collages. On each right-hand page, there is a tense, close-up confrontation between an animal and its attacker: turn the page, and the prey has tricked the predator with camouflage and other self-defense tactics. The first example is an octopus, but most of the creatures will be new to children, from the hover fly (which mimics the appearance of a wasp) and the hog-nosed snake (which plays dead) to the South American basilisk "Jesus Christ" lizard (which uses its large feet and great speed to run across the surface of water). There is less text here than in some of Jenkins' other books, and children will want to find out more about the particular animals and their behaviors and habitats. The collages are clear and uncluttered; each brilliantly colored picture draws your eye to the dangerous standoff. The scenes vary from the deep blue of the ocean depths to the grainy brown of a tree trunk, and set against these backgrounds are dramatic details of the transformation that allows the animal to survive. The final question--which is also the title of the book--makes clear why these zoological facts have the mythic power to scare us and connect us with the natural world. Even as kids shudder at the bared teeth of the predator, they will identify with the trickster who gets away. --Hazel Rochman