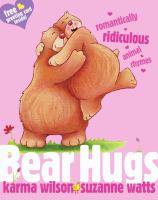 Karma Wilson was an only child who grew up in Idaho and developed a love of reading at an early age. She was reading a novel a day by the age of eleven. Karma never considered a writing career until she and her husband used a tax refund to buy a computer. Determined to make the machine pay for itself, Karma learned to type and decided to try her hand at writing. After countless rejections, Bear Snores On was released in 2002 and made it on both The New York Times and Publishers Weekly bestseller lists for children's books. Since then, she has had more than 30 other books accepted for publication. Her title Bear Says Thanks made The New York Times Best Seller List for 2012. (Bowker Author Biography)